If there’s an instrument that can tell India’s story in all its multifaceted richness, it’s the handloom. The rhythmic rattle of the loom has sounded in India’s villages for millennia; every motif that takes shape beneath the weaver’s nimble fingers bears influences from near and far, and every technique is an innovation sparked by the intertwining of cultures.

This is particularly true of the sari. If the luxe Benaras weave speaks of Mughal patronage through its flamboyant Persian motifs, then the tie-and-dye technique that colours the eastern coast’s ikat saris is a memento of trade and cultural links with Indonesia. The Kanjivaram sari, its motifs infused with nature and mythology, mirrors Tamil Nadu’s cultural landscape. Generations of weavers have been the keepers of these stories, resolutely working at the loom, even as their own story becomes more imperiled.

National Handloom Day, observed on August 7th since 2015, draws attention to not just the products that are created on the handloom, but the people who create them as well. For, a handwoven sari is an extension of its weaver’s skill and imagination, and filled with the richness of human touch. It’s said that no two handwoven saris are ever alike, even when crafted by the same weaver. 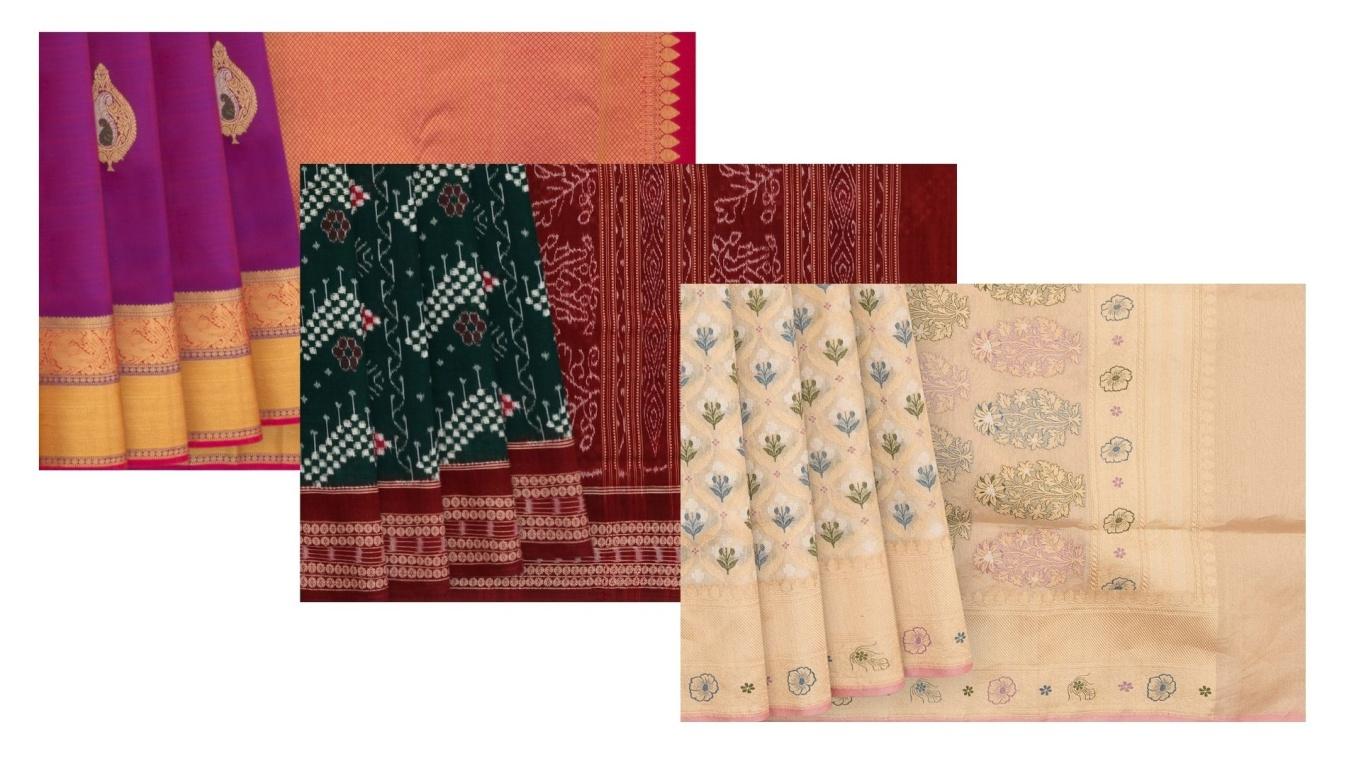 These handwoven saris from our collection (from left: Kanjivaram silk sari, Orissa cotton sari, and Benaras silk sari with Jamdani motifs) showcase the depth and diversity of India’s handloom heritage.

Over the years, the handloom industry has employed countless millions and been the foundation of communities. Today, it is second only to agriculture in generating employment in rural India.

They have found mention in ancient Roman texts, with Pliny wryly observing that imports from India, including cotton and silk, ‘were draining Rome of her gold’. The Greeks named that coveted midnight blue dye, indigo, after India. In the 17th century, the French traveler Pyrard de Laval wrote that Indian fabrics adorned “everyone from the Cape of Good Hope to China, man and woman…from head to foot.”

The demand for handloom fabrics contributed to the treasuries of kingdoms across the Indian subcontinent. In its villages, handloom weaving became richer and more complex, spawning more specialized jobs – cultivators, dyers, spinners, weavers, embroiderers, printers, and traders, to name a few.

Naturally, the artisans’ techniques found their finest canvas on that yards-long garment that women across India wore – the sari. Even today, weavers take anything from a few weeks to six months to create a handwoven sari, patiently creating a sartorial masterpiece.

Indian handloom saris are fine examples of ingenuity and imagination. Simple modifications to the warp and weft can give rise to innumerable designs and textures. The double ikat weave of a Pochampalli silk sari, for example, is achieved by resist-dyeing the warp and the weft threads separately with different patterns, and then looping them together on the loom to match perfectly. The Jamdani saris of Bengal are created using a supplementary weft, and continuously starched to give them their distinctive look and feel.

The handloom also allows for unique fusions of techniques and prints from different parts of India. This cross-pollination yields everything from Kanjivaram silk saris with Bomkai motifs to Uppada cotton saris with Jamdani brocades, and even fabric innovations such as our patented*
RmKV Lino silk saris. 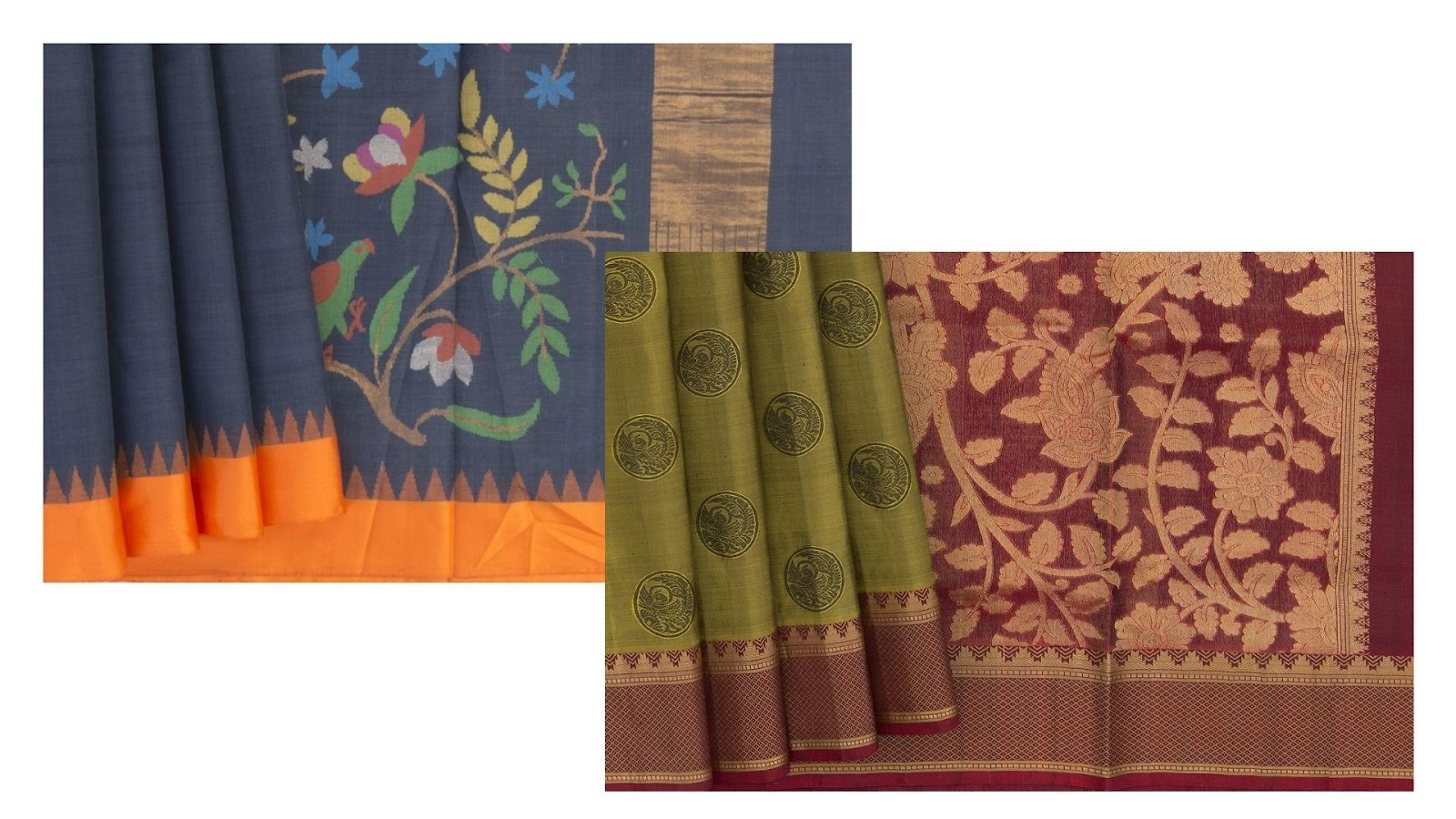 The handloom enables weavers to experiment with techniques and motifs. The pallu of this Uppada cotton sari (left) features delicate Jamdani motifs, while the Kanjivaram silk sari (right) carries an exquisite Kalamkari design on its pallu.

Sustainability, slow fashion and mindful consumption are at the core of handloom weaving. Handloom saris are made from pure cotton, silk or silk-cotton, which are all biodegradable and eminently breathable. A single handloom sari can take days, and sometimes months, to be completed. The wastage is minimal. In contrast, the quick turnarounds of fast fashion results in landfills full of mass-produced clothing that are becoming increasingly difficult to recycle.

Industrialization and other historical factors brought about an abrupt change in India’s handloom industry and communities. Ease and economy edged out craftsmanship and creativity, and India’s weavers are still reeling from the impact.

Mills and power looms continue to affect the livelihoods of handloom weavers. Government protections such as the Handloom Reservation Act (1985) are difficult to implement on-ground. Policies have tried to separate power looms and handlooms and give the latter priority, but the power loom sector has encroached on many of the protections and subsidies reserved for handlooms; this has caused a further deterioration in the condition of small handloom cooperatives and independent weavers.

Handloom weaving isn’t merely an underpaid profession; it’s also underappreciated. With factories churning out cheaper imitations by the truck-load and the culture of fast fashion spurring trend-driven consumption, there’s little regard for craftsmanship.

Handloom weaving often involves the entire family, and its skills are passed on from one generation to the next. With younger generations preferring to migrate to cities or pursue higher-paying jobs, India’s handloom heritage is on the brink.

At RmKV, our métier is the handloom sari and our mission is to showcase its richness and relevance. Since our inception in 1924, we have championed weavers and their work by not just creating more unique and contemporary sari designs, but also improving the tools of a weaver’s trade.

The Modern Pneumatic Handloom (MPHL) is a patented RmKV innovation that reduces the physical strain of working on a traditional loom by using compressed air to raise the jacquard cards. On a traditional loom, the weaver has to repeatedly lift a weight varying from 25-50kgs to raise the cards. Moreover, the MPHL replaces traditional jacquard cards with an electronic jacquard controller. This makes using the handloom less strenuous while retaining all the artistic aspects of weaving a sari by hand. This will also encourage more women to take their seat at the handloom and contribute to the household income. Moreover, the MPHL can substantially increase sari production, helping weavers craft up to five times as many saris in a month.

Another challenge facing the handloom industry is that it is largely unorganised. Although the weavers are highly skilled, the lack of formal training and official recognition has hampered their chances to grow. A government initiative called Pradhan Mantri Kaushal Vikas Yojana (PMKVY) seeks to rectify this through training and certification programmes.

These programmes are being implemented across the country, and we partnered with the government to extend PMKVY initiatives in Tamil Nadu. Apart from offering weavers training that helps them acquire a wider range of skills, the PMKVY initiative is also a certification programme that recognises their existing skills in weaving. This has been pivotal, and has helped weavers secure loans to expand their businesses while government recognition has given them the credibility required to approach global clients. 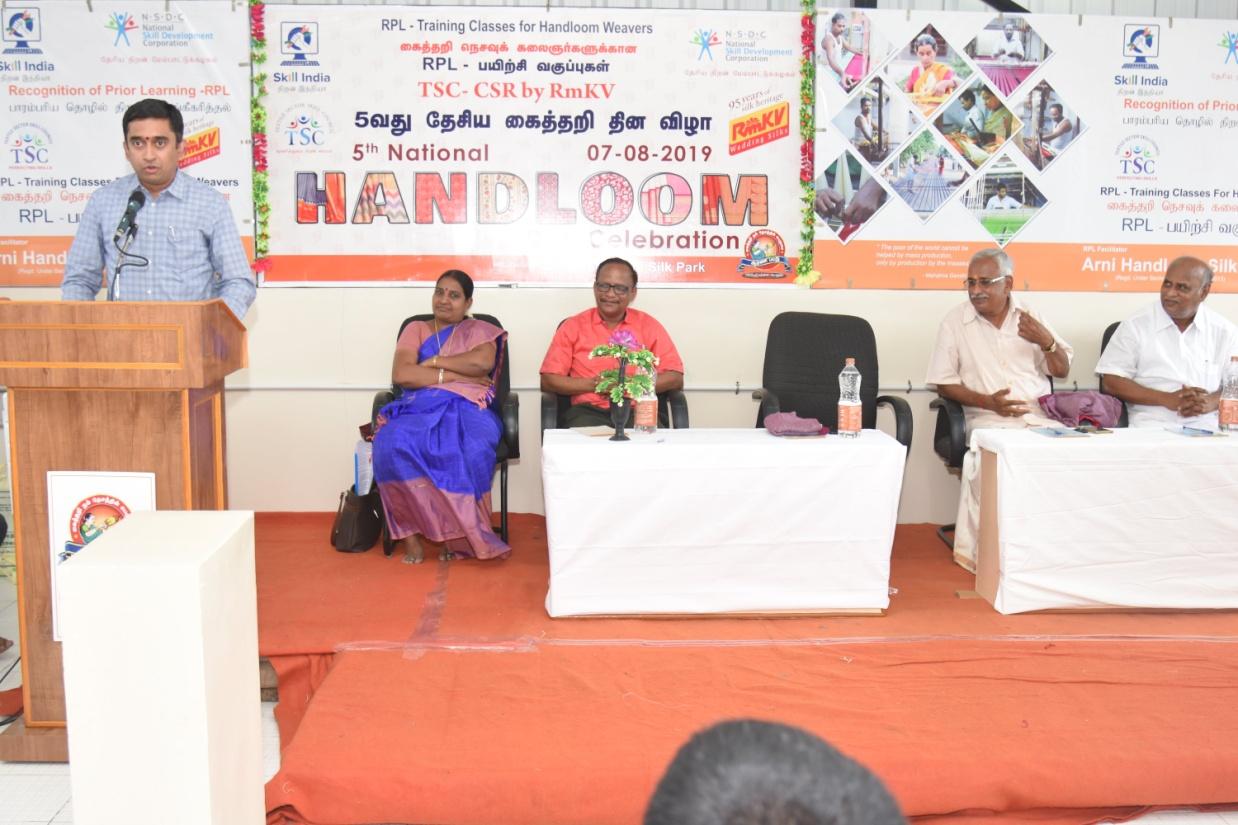 Yet, perhaps the most decisive means of change won’t come from the government or even those of us who work with the handloom industry. The most powerful agent of change is you, the consumer. Whenever you buy a handloom product instead of a factory-made one, you signal to weavers that their skills are superior and valued. When you pay a fair price for their creations, you aren’t just supporting an individual or his family; an entire community and ancillary economy thrives.

On 7th August, 1905, Mahatma Gandhi announced the Swadeshi Movement with the turn of his spinning wheel. It’s fitting that 7th August was chosen to be National Handloom Day. As the symbol of a proud Indian identity and independent spirit, the handloom was once instrumental in reviving our fortunes. Perhaps it is now time for us to return the favour.