Handwoven Kanchipuram silk sarees are renowned as weaves steeped in tradition, but at RmKV, they’re the basis of our most iconic innovations. So in 1998, with the centenary of Raja Ravi Varma’s oil painting ‘Hamsa Damayanti’ around the corner, we were inspired to capture this sublime portrayal in a silk saree. What followed was a journey threaded together by belief and persistence, perhaps an echo of Damayanti’s own.

The legend behind Hamsa Damayanti

Raja Ravi Varma’s painting captures a pivotal moment in the story of the protagonist, Damayanti. Her legend is one of the many strands that compose the Mahabharata, and is remembered for its attributes of loyalty, love, conviction and persistence.

Damayanti, the princess of the Vidarbha kingdom, was famed for her beauty. Her mother hoped that the princess would be the bride of a god; she sent a swan (hamsa) to Lord Indra, inviting him to seek Damayanti’s hand in marriage.

Destiny had other plans. The swan got swept up in a storm and sought refuge in Nishada, the kingdom of Nala, a skilled charioteer and capable ruler. Impressed by how King Nala cared for it, the swan flew back to Damayanti instead of soaring into the clouds to meet Lord Indra. The swan sang Nala’s praises, Damayanti fell in love, and the god to whom she was promised was not pleased.

Despite the gods’ many deceits, Damayanti chose to marry Nala and lived happily as his queen in Nishada for years. Yet, the gods did not forget. They tricked Nala into gambling away his kingdom, forcing him and Damayanti into exile in the forest. Guilt-ridden and ashamed, Nala believed that Damayanti was better off without him and abandoned her in the forest. Devastated but undeterred, Damayanti searched for Nala, convinced that they would one day be reunited. She faced every challenge with poise and, 12 years later, they met again.

Nala won back his kingdom from his younger brother Pushkara, and all the wiser from their many hardships, King Nala and Queen Damayanti ruled Nishada admirably till the end of their days.

The art and the artist

Raja Ravi Varma is one of the most recognised Indian painters, and his works continue to resonate today. Born in Travancore (now in Kerala) in 1848, Varma was closely related to the royal family. Royal patronage gave him the opportunity to study both Indian and European art; this resulted in his distinct blend of Indian subjects and symbolism with European Academic art.

His muses included Indian life and mythology, and the oil painting ‘Hamsa Damayanti’ is a classic representation of his skill and style. It’s said that Varma tried many compositions, some featuring both Nala and Damayanti, before settling on the image we know today.

The painting shows Damayanti by the palace pond, enthralled by the stories of Nala being narrated by the swan. Her posture is refined yet relaxed, and her features are softened by her growing affection for Nala. Ravi Varma was famous for the expressiveness of his subjects’ eyes, and Damayanti’s have an inexplicable depth. Her silk saree glistens with gold zari, and the colours of each element in the painting create a sense of equilibrium.

The Academic school of European art balanced reality and romanticism, so that subjects depicted in paintings appeared perfect and idealised. Its influence is tangible in the painting ‘Hamsa Damayanti’, while the subject itself is drawn from the bedrock of India’s culture. It remains one of Varma’s finest achievements as an artist; on his 65th death anniversary, India Post commemorated the occasion with a postal stamp featuring this very painting. 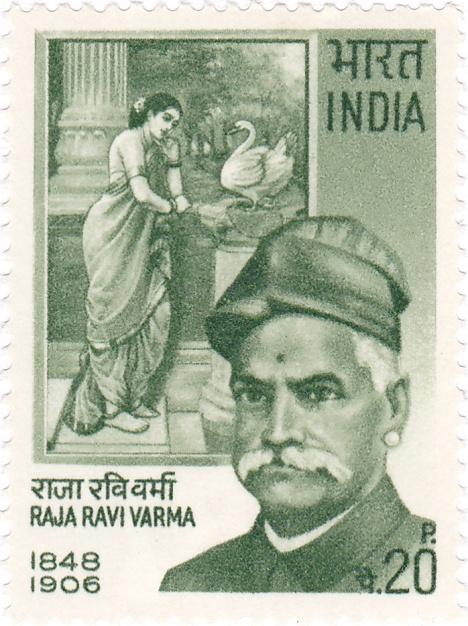 Capturing the subtle details of an oil painting in a handwoven silk saree posed quite a challenge. After 18 months of trying weaving techniques from across the world, we found success with the French Tapestry method.

Practised since the Middle Ages, French Tapestry is ideal for capturing a painting’s intricate details and interplay of light and shadow. This is because the weft thread of a particular colour is carried over and under the warp threads only where the colour appears in the design. Think of the warp threads as a frame or the foundation of the saree; the weft threads are looped around specific warp threads, so in the completed saree, one can only see the coloured weft threads. The same technique is used for handwoven Paithani sarees. The below video shows how this method was adopted by our master weavers for the ‘Hamsa Damayanti’ Kanchipuram silk saree. As in the case of Ravi Varma’s oil painting, here too is a skillful melding of East and West – a Kanchipuram silk saree with a pallu crafted using one of Europe’s finest weaving traditions, French Tapestry.

RmKV’s Hamsa Damayanti silk saree was unveiled to instant acclaim. The handwoven Kachipuram silk saree embellished with pure gold zari featured Ravi Varma’s ‘Hamsa Damayanti’ on the pallu in evocative detail. It was modeled by Deepika Padukone, who was on the cusp of her career at the time. 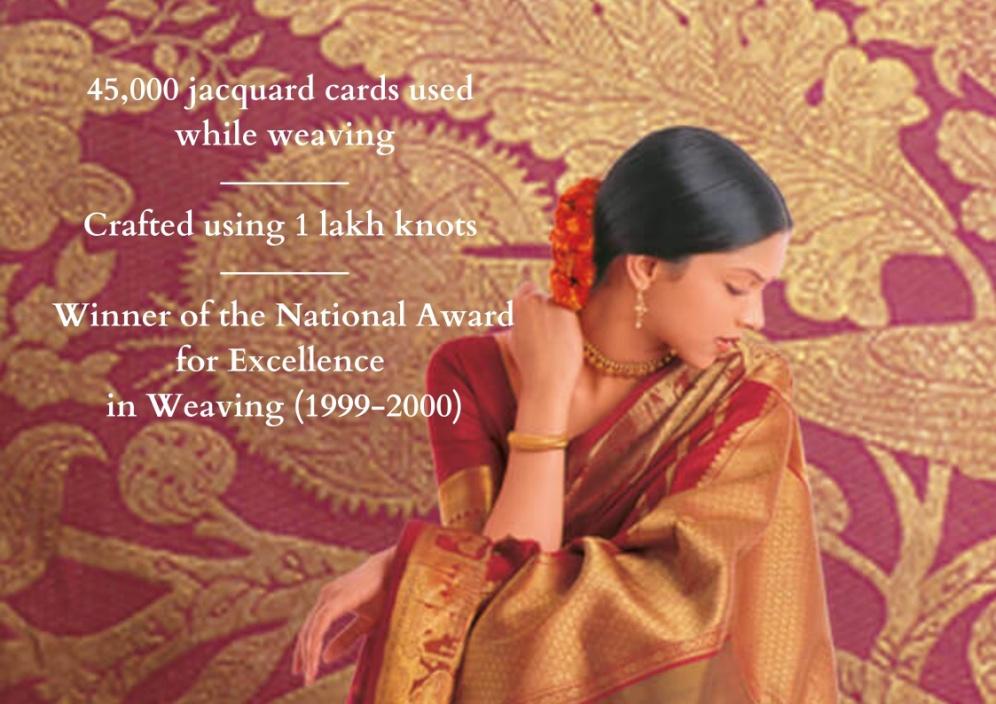 The Hamsa Damayanti Kanchipuram silk saree is a technical feat and a fine work of imagination.

While the pallu is the talking point, the body and border are also exceptional. The pure gold zari border is a visual depiction of the story of Damayanti and Nala. The tale unfurls in panels that have been woven in exquisite detail, capturing fluid movements and subtle expressions in the language of warp and weft. The body is sprinkled with dainty floral buttis that balance the complexity of the border and pallu. 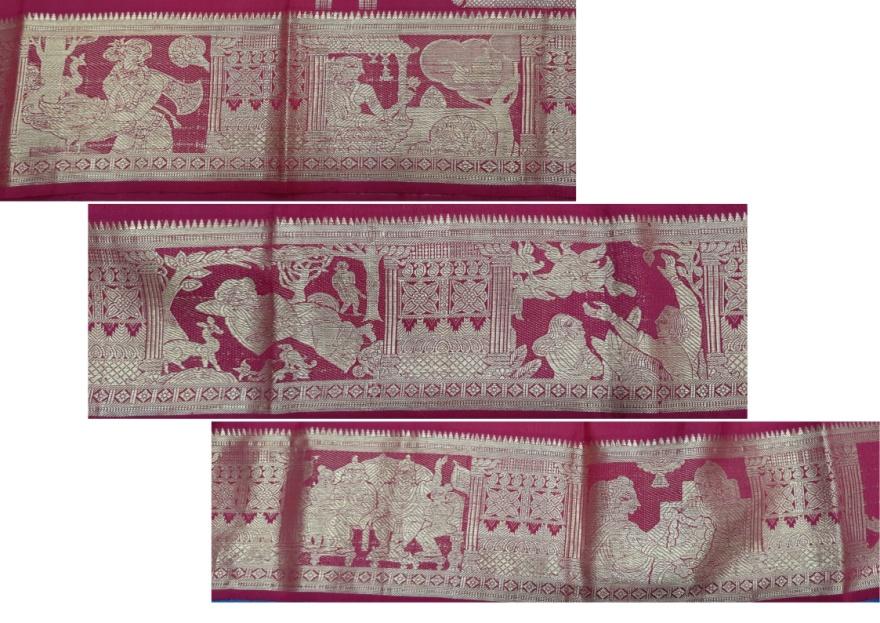 The pure gold zari border features episodes from the Hamsa Damayanti story. Seen here are scenes in which the hamsa (swan) tells Damayanti about King Nala (top left),where Nala abandons Damayanti while in exile in the forest (centre),and Nala and Damayanti are reunited and once again the rulers of Nishada (bottom right).

The Hamsa Damayanti Kanchipuram silk saree remains one of our most coveted creations, and is made to order. Each saree takes two weavers 75 days to complete, using a staggering 1 lakh knots and 45,000 jacquard cards. The pairing of Kanchipuram weaving with French Tapestry was a pioneering effort, and the innovation earned RmKV the National Award for Excellence in Weaving in 1999.

The saree was also presented to Princess Pooyam Thirunal Gowri Parvati Bayi of the royal house of Travancore, a direct descendant of Raja Ravi Varma. With this moment, our tryst with Varma’s sublime oil painting had come full circle.

The award-winning silk saree is the latest rendition of Damayanti’s tale, which has been told by sages and sung by poets for eons. It grows more treasured with time and, in that sense, finds a parallel in the agelessness of a handwoven Kanchipuram silk saree. 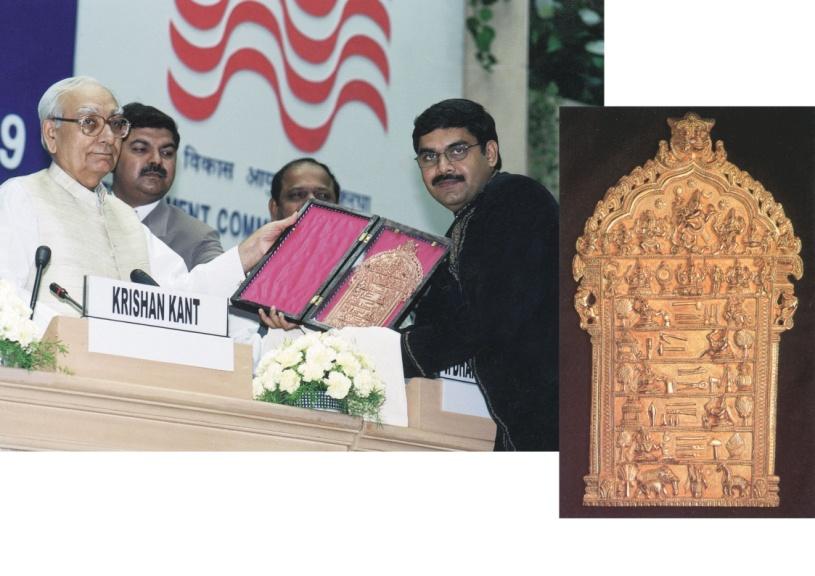 K. Vishwanathan of RmKV receiving the National Award for Excellence in Weaving from Krishan Kant, the Vice President of India, in 1999; a close-up of the award (right).